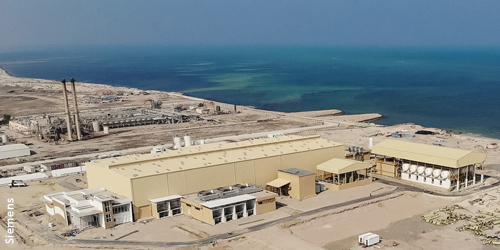 In Saudi Arabia, freshwater is a precious and rare commodity. At the same time, demand for private use, agriculture but also industry is rising rapidly. To cover this, saltwater has long since been desalinated in the country, where large parts are desert areas. Concerned about the consequences of climate change, the Saudi Arabian utility KACST (King Abdulaziz City for Science and Technology) is now relying on the sun as the energy source for the energy-intensive process. After all, seawater desalination is one of the largest producers of carbon dioxide (CO2) emissions in the Near and Middle East.

In the vicinity of the city of Al Khafji, on the coast of the Persian Gulf, the plant with a capacity of 60,000 m³ of drinking water per day was built starting in 2016, which in the future can be expanded to up to 90,000 m³ per day. The ambitious project was developed and implemented by the water desalination experts of Rawafid Industrial and Advanced Water Technology (AWT). The new plant, which uses a two-stage reverse osmosis process, will be powered by a nearby solar power plant with a connected load of 20 MVA. Plant operation is based on available solar energy, so that the largest possible share of sustainable energy is used for water production. This not only leads to significant CO2 savings, but also to lower operating costs.
The peak power of the photovoltaic power plant surpasses the actual needs of the desalination plant, so during the daytime the surplus energy can be fed into the public grid.

Austrian Siemens specialists also in demand internationally
With a very tight schedule, Rawafid and AWT put special emphasis on reliability and experience in selecting their project partners. For the electrical, automation and instrumentation packages, Siemens AG Austria was chosen as the general contractor. “In order to realize such a project, we prefer to assign the complete electrical, control and instrumentation package to a company. In this project, we chose Siemens, a leading provider of electrical equipment for power and water generation. Siemens produces all components for power transmission and distribution, low-voltage distribution boards and control systems themselves, “said Ing. Ali Awadallah, CEO of Rawafid Industrial and project manager. “In addition, the Siemens control system is universally applicable and can be used in various industries such as oil and gas, petrochemicals, refineries and water treatment. We have worked with Siemens Austria in the past in the United Arab Emirates – a collaboration that has been very successful.”

Logistical challenge: 37,000 individual parts weighing 425 tons
Siemens has been able to plan, produce and deliver all systems and components within the required period of time. After placing the order, Siemens Salzburg developed a comprehensive solution for electrical and automation technology, NXPLUS C medium-voltage distribution including SIPROTEC protection systems, SIVACON S8 low-voltage distribution, SINAMICS frequency converters and SITRANS process measurement technology for monitoring flow, level, pressure and temperature. In addition, 8 transformers from Weiz were delivered. The different components were interconnected using the industrial SCALANCE communication technology. The control system for the entire water treatment including power distribution is based on the SIMATIC PCS 7 process control system. The total weight of the 37,000 individual parts supplied to Al Khafji was 425 tonnes. That this logistical challenge could be mastered was another great achievement of the Siemens team. All systems were ready on time for installation.

Lighthouse project and milestone in the pursuit of sustainability
The plant runs smoothly since its commissioning and produces water in better quality than expected. The world’s first solar-powered large-scale desalination plant also serves as a lighthouse project for similar plants and is a milestone in the pursuit of sustainability. By reducing both operating costs and CO2 emissions through the use of renewable energy, desalination is becoming an increasingly viable and sustainable method of extracting and delivering clean water.

Siemens Austria gets follow-up order for eight more seawater desalination plants
Due to its great success and high level of customer satisfaction, the consortium A3C (AWT, Rawafid, SETE and Al Fatah) awarded Siemens the task of equipping eight additional seawater desalination plants in Saudi Arabia with electrical equipment, with all systems expected to be operational within eleven months.