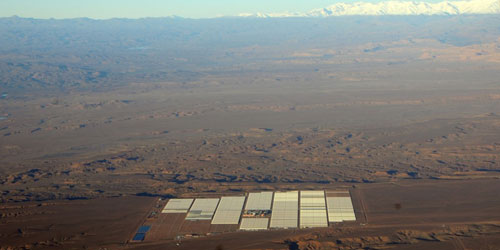 The Austrian power plant specialist VTU Energy provided the plant accounting and settlement system for Noor 1 ISP in the Moroccan solar park at the borders of the Sahara desert.

The newly opened world´s largest solar power plant Noor 1 (=Arabic: light) located in the Moroccan Solar Park Ouarzazate raised attention around the globe: The world’s largest solar power plant is producing up to 160 MW of electricity from half a million mirrors in a 4.5 km² parabolic trough field.
The power plant will generate electricity for 350.000 people. Utilizing a molten salt storage the power station can provide electricity to the grid for up to three hours after sunset. An expert team from Styria specializing in thermal power generation processes delivered the highly complex settlement system for this power plant.

Major Project for power plant experts from Styria
In the course of a tender in 2012, the project was awarded to a consortium led by the Saudi Arabian ACWA Power International. During the construction phase VTU Energy, an Austrian company headquartered in Grambach/Graz, received the order for the turnkey delivery of the plant accounting and settlement system of Noor 1. A settlement system for such a large power plant not only processes metering data, but also contains a complex set of formulas to evaluate efficiency and availability guarantees. In addition, the implementation of the various contractual clauses in an automated system also requires much tact in consultation with all parties. The Noor-1 system was the first settlement system in Morocco and was successfully completed and handed over to the operating company in November 2015.

“The contract for the implementation of the settlement system for Noor 1 was a further important step on VTU Energy’s growth path. Northern Africa is a highly interesting region, especially for internationally funded solar power plant projects. We are proud to be part of this mega-project, and we are pleased about the smooth and successful cooperation with renowned international power companies, “says Peter Pechtl, Managing Director of VTU Energy.