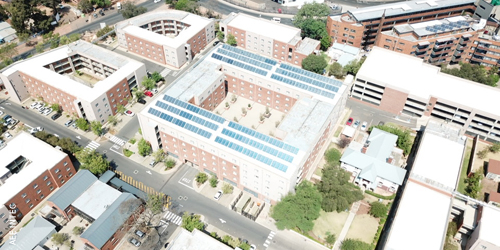 With technical know-how and financial support from Austria, the large-scale use of renewable energies has been successful in six countries in southern Africa.

In sub-Saharan Africa, only 24 percent of people have access to electricity. Power outages are part of everyday life, and their impact will hinder long-term economic growth and the competitiveness of local companies. For the end user, the lack of power supply means high costs and little security.

Harness the potential for renewable energy and energy efficiency
With the transfer of the two largest solar thermal systems in the region, this is changing gradually. The plants provide reliable hot water supply from solar energy, which also saves costs. The core elements of both plants come from the Carinthian company GREENoneTEC. The rest – storage, piping, heat exchangers – are produced by local businesses. The Austrian ambassador to South Africa Johann Brieger opened the facilities in Johannesburg.

Specifically, this is the first sub-Saharan district heating plant for WITS University in Johannesburg and a large-scale solar process plant for a tannery. They each measure 600 m² of collector surface and were built as part of the Southern African Solar Thermal Training and Demonstration Initiative (SOLTRAIN) of the Austrian non-university research institute AEE INTEC. AEE INTEC works with universities, research institutes and vocational schools, the local solar industry and energy ministries in six countries (South Africa, Namibia, Botswana, Lesotho, Mozambique and Zimbabwe) to harness the enormous potential for solar thermal in the region.

Save electricity (cost) with hot water from solar energy
Solar thermal systems support these countries in the long term in achieving their climate goals. Measurements carried out in Namibia and South Africa show that local households use 40 to 50 percent of their electricity for hot water. A broad transition to solar thermal systems relieves the electricity sector enormously – and also contributes to the reduction of local CO2 emissions. Most of the region’s energy needs are currently served by coal.

In the end, these facilities make a tangible difference to the living conditions of local people: their electricity costs are falling, local value added is rising, they have secure access to hot water from renewable energy and new jobs are being created. So far, around 7,000 people have benefited from the project every year over the past ten years.

Contributing to affordable and clean energy for all
“The ADA has been behind SOLTRAIN for ten years. In the long term, we will respond to the concrete needs of our partner countries. And we are making a contribution to reducing energy poverty in southern Africa, “says ADA’s Managing Director Martin Ledolter, explaining the efforts of Austrian Development Cooperation to ensure affordable and clean energy worldwide by 2030. “With SOLTRAIN in general and the inauguration of the two largest sub-Saharan solar thermal plants in the world, we are taking a significant step towards that goal. We recently pledged another 2.5 million euros for a fourth phase of the project, “said Ledolter at the opening in Johannesburg.

“Renewable energy and efficiency discussions focus almost exclusively on the electricity sector. It is overlooked that around half of the global end energy demand is accounted for by heat and air conditioning. Only 20 percent of the final energy demand is generated by electricity. Especially in countries south of the Sahara, households, hotels, restaurants and hospitals, as well as commercial and industrial companies, use a not inconsiderable part of their electricity supply for heating, cooling and hot water. That means a waste of already rare energy. Coupled with the high solar radiation in the region, these framework conditions create enormous potential for solar thermal systems. With SOLTRAIN, we ensure that this potential does not go unused,” adds Werner Weiss, Managing Director of AEE INTEC.

The constructed facilities range from smaller units with 2 m² collector surface for hot water production of single-family homes to medium-sized units between 20 and 50 m² collector area for social facilities, student dormitories or hotels to the supply of commercial and industrial processes with up to 600 m² collector area. The annual solar yield of all installed plants amounts to 1.83 million kilowatt hours (kWh). This corresponds to a power saving of 2.02 million kWh and the avoidance of 1,222 tonnes of CO2.

In total, since 2009, 2,380 people have been trained in the planning, construction and quality control of solar thermal systems. The courses learned teach local companies in a total of 326 demonstration projects – thus guaranteeing the long-term professional use and maintenance of the facilities. In addition, the project supports students in master theses dealing with solar energy.