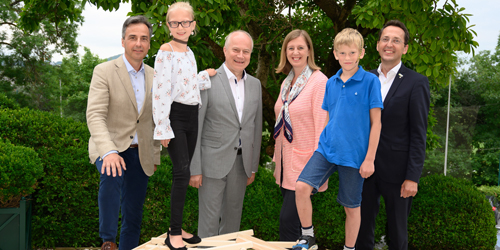 The companies in the Austrian Green Tech Cluster are an impressive illustration of how climate protection and economic growth are not mutually exclusive. The green sector clocked up record figures this year, with employment exceeding 25,000 people (+7.48 %) for the first time and turnover climbing past the 5 billion Euro (+3.66%) mark; that represents 11% of the regional economic output of Styria. And when it comes to exports, green technologies continue to be a winner: Of all the machines and products sold, more than 96% go outside of Austria. In total, technology from the Green Tech Valley helps produce 20% of the green energy worldwide and saves some 550 million tonnes in CO2 emissions.

Sales at record level
From May to June 2019, 80 green tech companies were surveyed on their corporate figures. The results are record-breaking: For the first time, more than 5 billion euros (+ 3.66% compared to the previous year) were generated using green technologies. The largest part of this revenue was generated in the “Renewable Energy” business area with 3,197 million euros (+ 3.84%). Followed by the sectors “Sustainable Construction and Renovation” with 955 million (+ 2.30%) and “Waste and Material Flow Management” with 732 million Euro (+ 9.82%). The “Water / Wastewater” division recorded the largest percentage increase (26.04%) to a total of 104 million euros.

Employment on the rise: potential for growth exists
In total, more than 25,000 people are employed in the Styrian Green Tech industry. This corresponds to around 5% of all of Styrian employees. Most people work in renewable energy (13,139 people) and waste and material flow management (5,712 people). The largest employment growth was in the renewable energy sectors (+11.62%) and water / wastewater (+4.46%). One of the biggest challenges in the industry is currently the availability of suitable employees. More than half of the companies claim that they have limited access to skilled workers.

Research & Export as the pillar of successful companies
The Styrian Green Tech companies continue to rely heavily on research and export. R&D expenditure is at a very high level of 4.47% of sales. More than 96% of green products and machinery are exported abroad. The most important trading partners are the USA, followed by China, Switzerland, Japan and Australia. Across countries, the Asian market, followed by North America and Europe, is the largest customer of Styrian environmental technologies.

20% of electricity generated worldwide with the help of Styrian technology
Even though Styria has only 1.2 million inhabitants, the technologies produced here have a major impact on a global scale: 550 million tons of CO2 save Styrian solutions worldwide every year. That is 40 times more emitted than the region. First and foremost, 20% of global green electricity has a Styrian heart, derived from hydropower, biomass and solar plants. The 1,220 terrawatt hours produced in this way correspond to the annual electricity consumption of the whole of India.

Hotspot for global green technologies
Every year, biomass and solar plants from Styria generate 100 TWh of green heat and cold worldwide. This corresponds approximately to the entire district heating needs of Germany. In terms of mobility, around 960 million liters of biofuels are produced in Styrian plants, enough for 107 routes from the earth to the sun. And the 116,000 cordless packs from Styria drive 4% of all global electric and hybrid cars in operation. But recycling also contributes to the reduction of climate emissions, e.g. in the glass industry: 26 million tonnes of glass are recycled worldwide with Styrian sorting systems, which is twice as much as collected in the EU.