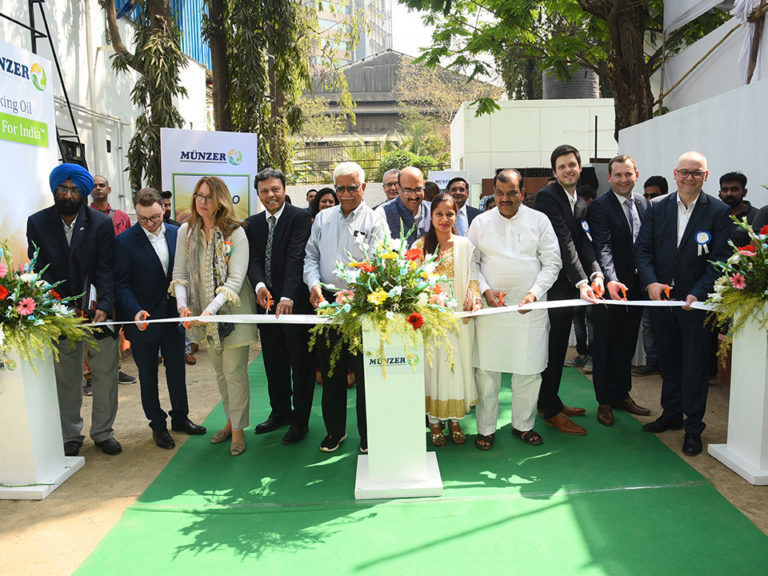 “The difference between what we do and what we can do would solve our problems. So the difference between talking about it and really tackling it. We tackled it and set the biggest internationalization step in the history of our family business. Our Indian subsidiary, Münzer Bharat Pvt. Ltd. opens its biodiesel production plant in Mumbai. We are now represented outside Europe for the first time since the company was founded in 1991, and then in the second largest economy in the world, “said Michael Münzer, managing partner of Münzer Bioindustrie GmbH together with his brother Ewald-Marco Münzer.

Münzer Bharat (English for “Münzer Indien”) was founded in September 2016 in Mumbai, with the aim of collecting used cooking oil and refining it into biodiesel. “Many ask us, why India. The question is simple to answer, we were invited by the Indian Government to help the country solve one of its big problems, the wrong disposal and handling of used cooking oil, “adds Ewald-Marco Münzer. India, like Europe, faces the challenge of reducing its import dependency on fossil fuels and tackling greenhouse gas emissions. Moreover, the garbage problem has reached a dramatic level, especially with liquid wastes. “We offer solutions for both problems from a single source. Used grease, which is currently disposed of via the sewer, and thus clogged the sewage systems, is disposed of professionally and subsequently to a high-quality raw material for biodiesel production. This in turn makes a significant contribution to the decarbonisation of the transport and transport sector.”continues Ewald-Marco Münzer.

“Especially in India there is another aspect to it. India is world champion in recycling. Everything is used again, including the used cooking oil. But not for energy production, in most cases, this waste is returned to the food cycle and thus on the plate of the Indians. However, few are aware of the health risks associated with this, “adds Michael Münzer.

Münzer Bharat Pvt. Ltd. currently disposes used cooking oil from more than 400 partner companies, ranging from the catering and hotel industry as well to the food processing industry in Mumbai. The collected used cooking oil is processed in the production plant in Navi Mumbai into biodiesel. Currently, the production capacity is 10,000 liters per day.

“The next steps are already planned. We are already planning to expand our activities in the surrounding cities, such as Pune or Thane. The most important step has been taken; now we have to prove ourselves in a country with more than 1.3 billion people, “says Michael Münzer. “We have a great local team, and together with our team in Austria, we are very well positioned for the future.”

Münzer Bioindustrie GmbH is an owner-managed family business with headquarters in Sinabelkirchen, Styria. The company is one of the largest liquid waste collectors in Central Europe and also operates an Austria-wide collection system for used cooking oils and fats. More than 206,000 tonnes of waste-based biodiesel are produced each year at its two production plants in the Viennese oil port of Lobau and in the Gaishorn am See region of Styria. This makes Münzer one of the largest producers of waste-based biodiesel in Europe.