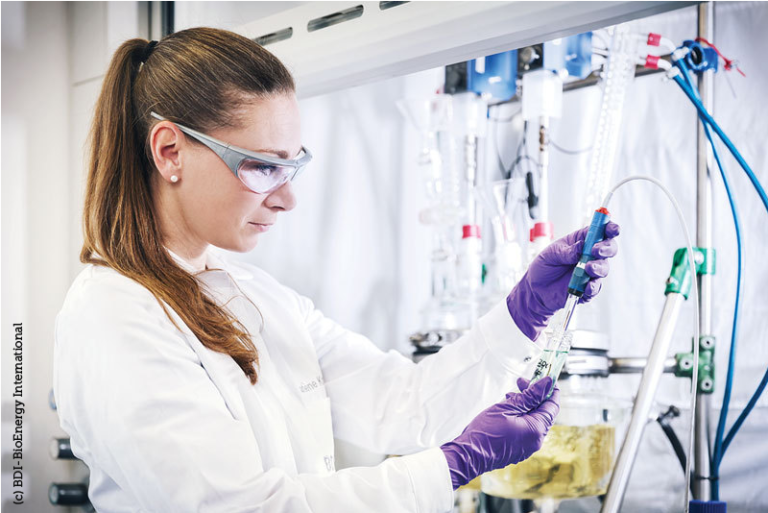 The usage of algae oil as a feedstock for renewable fuel is present in the literature, but less information is available when it comes to practical application. In course of the “7th Framework Programme for Research and Technological Development” (FP7), the European Commission supports the research and demonstration of sustainable biofuel production from algae. The All-Gas Project demonstrates the sustainable large-scale production of biofuels based on low-cost microalgae cultures using municipal wastewater. Beside the upstream cultivation testing, two different ways for using algae as feedstock for fuels were investigated within the downstream part of the project. One way was to use algae directly in an anaerobic digester. After different cleaning procedures, the biogas was then used in a vehicle fleet test.

The other way of using algae as fuel is the production of biodiesel. Austria-based technology company BDI-BioEnergy International took over responsibility for this part. Algae oil was first extracted from the biomass and thereby a new, patent-pending process was invented for lipid extraction out of wet algae biomass.

Concerning biodiesel production, algae lipids turned out to behave completely differently compared to fresh vegetable oil or waste oil and fats due to the extremely high content of impurities. In particular, the high content of phospholipids hinders phase separations within conventional biodiesel processes. It was therefore obvious to apply BDI’s benchmark RepCat process. RepCat avoids phase separation and, as a result, is the first choice for difficult types of feedstock. Both esterification and transesterification happen in a two-stage reactor system operated at elevated temperature and pressure by means of a heterogeneous, recyclable catalyst. Methyl ester is then finally purified by distillation to achieve EN 14214 requirements.

In detail, it was possible to reduce the initial 995 parts per million (ppm) phosphorus in the algae oil to below 1 ppm. In the case of magnesium, which was also extracted as it is part of the co-extracted chlorophyll, the final concentration in the algae biodiesel was below the detection limit. The sulfur content was reduced by more than 92 percent. Nevertheless, since its initial content in the algae oil was at 1,320 ppm, the EN 14214 limit of 10 ppm could not be achieved; further sulfur reduction steps are necessary and available with BDI technology.

In the algae oil, fatty acids (either bound or free) were found to be between 40 and 50 percent mass/mass (m/m). Only this part of the algae oil can be converted into fatty acid methyl ester and is therefore influencing the EN 14214 parameter ester content. However, with the RepCat process, the ester content of the algae biodiesel was 97.1 percent (m/m), which is above the 96.5 percent (m/m) limit in the standard.

Special attention was also paid to the fatty acid profile, since there are limits in the EN 14214 on the content of linolenic acid methyl ester (C18:3) and polyunsaturated methyl esters with more than three double bonds. The content of C18:3 was below the limit of 12 percent (m/m). An interesting topic is the content of polyunsaturated fatty acids (PUFA). These PUFAs are responsible for improper fuel stability as they rapidly polymerize. Surprisingly, the unusual fatty acid C16:4 was found in the algae biodiesel with a very high content of 3.4 percent (m/m). However, the oxidation stability after the addition of 1,000 ppm butylated hydroxytoluene (BHT) resulted in 8.2 hours, above the limits of ASTM D6751 and EN 14214.

The algae biodiesel was mixed with a conventional fossil diesel—EN 590 quality with a cold filter plugging point (CFPP) of minus 31 degrees Celsius—particularly to investigate its influence on cold flow properties of the blend. The neat algae biodiesel had a CFPP of 1 degree C, which is comparable to biodiesel derived from used cooking oil. The cold weather properties of a B7 blend were not significantly influenced, and the resulting CFPP was minus 29 degrees C.

Summing up, it was shown by BDI that, despite the very unconventional composition of the algae oil, it is possible to produce algae biodiesel by using the BDI RepCat technology. However, it must be noted that the term algae oil represents a high variation of different lipids and that its composition depends on the type of algae and its cultivation process. Therefore, a comprehensive analysis of the oil and transesterification trials are necessary to evaluate its suitability for biodiesel production.