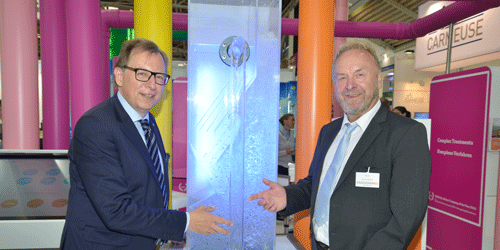 Styrian innovations point the way to the future at the world’s leading trade IFAT exhibition
Ten companies from the Green Tech Cluster demonstrated the way to the future of recycling with the début of many of the world’s latest technologies and innovations. Under the guidance of the Minister of Economy, Dr. Christian Buchmann, they were presented to an international audience from 59 countries at IFAT in Munich, the largest environmental technology exhibition in the world. As a result, the Styrian delegation also established valuable contacts with some of the leading environmental technology companies in the world.

Leading the delegation from the Green Tech Cluster, Minister Buchmann commented that, “IFAT is the largest environmental technology exhibition in the world, and the ideal platform for our leading technology companies to present their products and services at an international showcase. Together with the Green Tech Cluster and the Styria Internationalisation Centre, I support them in this, both in securing and creating new jobs in Styria.” Discussions were held with leading industry players such as Veolia and ABB, with delegations from Denmark and Canada, and 150 customers attending the Styrian B2B reception.

The next generation in recycling
The technology leader Komptech presented its ingenious “Shredder of the future” concept at IFAT Munich. Graduates in Industrial Design from the Joanneum University of Applied Sciences develop companions such as “Atta”, which collects and chops up rubbish in conflict zones, or “Caris”, an autonomous demolition robot, which shreds material on the spot, and Topturn X 4.5, an agile machine, with which smaller composting plants can be easily processed.

2 in 1: Clarity provides two stage sorting in one machine
Clarity is an innovative system from the world leader in glass sorting, Binder + Co, which connects two systems in series: The Clarity 1000 VIS sensor-based sorter excludes plastic parts by colour definition, the Clarity 1000 NIR / VIS slide sorter separates according to plastic type. Typical applications of the system are in the area of electrical waste or light shredder fractions from recycling scrapped cars.

World début for pure segregated metals
Whether cars, coat hangers or other objects: they all contain valuable metals, which can now be separated to a high purity for the first time using the world’s first XRF sorter from REDWAVE. So far, only glass or minerals could be separated with XRF technology, but now non-ferrous metals can also be separated from each other using a novel development. As a result, high quality products, such as radiators or water turbines, can now be made from scrap metal from urban waste.

Making the chemical composition visible
The business start-up Perception Park presents another novel development from the Green Tech Cluster, which makes the chemical composition of materials visible using hyperspectral cameras, thus facilitating the separation of materials such as PVC from other plastics. At the show, visitors were also impressed with the “SEDA car flattener” with the built-in expertise of ATM Recyclingsystems, which deforms scrapped car bodies in only 50 seconds. The machine and plant manufacturer, Andritz MeWa, presented its improved core technologies at IFAT: from the QZ to the Bio-QZ cross-flow shredders. Andritz MeWa specialises in providing complex solutions through its product portfolio.